When you look at this image,  what do you see?

A vase?  A butterfly?  The profiles of two people facing each other?

What you experience is determined by your perspective.

Perspective matters. I say it a lot in social media posts. If you live with a chronic illness, understanding the power of those two words together could make a huge change in your quality of life.

That’s a bold statement, but I don’t make it without evidence.

It’s common to speak of human experience as a confluence of body, mind and spirit. In western culture, we tend to consider the brain to be the organ which unifies these experiences – it is the part of the body that holds the mind which connects with the spirit.

For all that we know about the brain, there is still much more to learn. In a recent Quora post, I was asked to comment on whether a change in brain chemistry precedes or follows the onset of depression. The essence of my answer was we don’t know yet, but my speculation is a change in thinking resulting in predominantly negative thoughts – perspective – precedes both. So, perspective matters.

There are a number of neurotransmitters that influence emotions and moods: acetylcholine, dopamine, norepinephrine, serotonin. There are commonalities with the neurochemistry of addiction and chronic pain[1]. Non-drug treatments for mood disorders, such as Cognitive Behavioural Therapy (CBT), are based on a premise that thought is the bridge that links perception with response (emotion, behaviour). 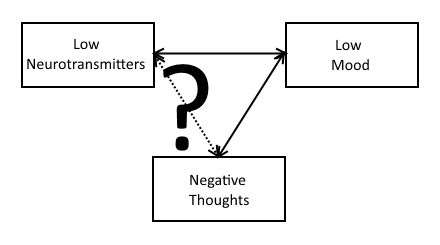 If this premise is correct, and if the mix of brain chemicals that mediate thoughts is different from the mix that mediates emotion, then what we think becomes the pivot point around which mood, and potentially pain, can turn. 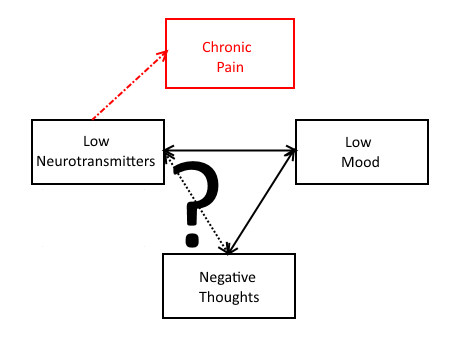 What is the evidence that negative thinking (cognitive distortion) influences mood?

“Cognitive distortions are negatively biased errors in thinking that are purported to increase vulnerability to depression (Dozois & Beck, 2008). Individuals experience automatic thoughts in response to events, which in turn lead to emotional and behavioral responses. The content of automatic thoughts is typically consistent with an individual’s core beliefs about important aspects of themselves, others, and the world. When negative core beliefs are activated and negative automatic thoughts elicited (comprised of errors in reasoning that are not evidence-based) a negative, neutral or even positive event may influence negative affect and maladaptive behaviours. Overtime, this sequence among thoughts, emotions and behaviours can cause or maintain symptoms of depression.”[2]

What is the evidence that negative thinking influences pain?

“Brain pathways that handle the reception of pain signals, including the seat of emotions in the limbic region, use some of the same neurotransmitters involved in the regulation of mood, especially serotonin and norepinephrine. When regulation fails, pain is intensified along with sadness, hopelessness, and anxiety. And chronic pain, like chronic depression, can alter the functioning of the nervous system and perpetuate itself.

Fibromyalgia may illustrate these biological links between pain and depression. Its symptoms include widespread muscle pain and tenderness at certain pressure points, with no evidence of tissue damage. Brain scans of people with fibromyalgia show highly active pain centers, and the disorder is more closely associated with depression than most other medical conditions. Fibromyalgia could be caused by a brain malfunction that heightens sensitivity to both physical discomfort and mood changes.”[3]

“In patients with fibromyalgia, catastrophizing is related to greater pain severity, amplified pain sensitivity as well as higher anxiety that can disturb sleep.”[4]Catastrophizing is a common kind of negative thinking (cognitive distortion) in which a problem is viewed in terms that make it seem worse than it actually is, “making a mountain out of a molehill”.

What is the evidence that changing your perspective reduces pain?

“Over the past three decades, cognitive-behavioral therapy (CBT) has become a first-line psychosocial treatment for individuals with chronic pain. Evidence for efficacy in improving pain and pain-related problems across a wide spectrum of chronic pain syndromes has come from multiple randomized controlled trials.”[6]

In a 2013 review of 23 randomized control trials involving more than 2,000 subjects, it was concluded that “CBT reduced pain, negative mood and disability compared with control interventions”, and follow-up consultations showed the benefit persisted 6 months after the final treatment given during the study.[7]

It’s easy to let daily pain to wear you down psychologically to the point where your thoughts become relentlessly negative and hopeless. The danger in this is that you enter into a self-perpetuating loop of distress consisting of pain, low mood, and negative thoughts, reinforced and sustained by low neurotransmitter levels.

Becoming more aware of the nature of your thoughts and pruning out those that are unrealistically negative provides a way of disrupting the cycle of suffering to reduce pain and other symptoms.

[4] The relationship between catastrophizing, anxiety, and sleep quality in fibromyalgia